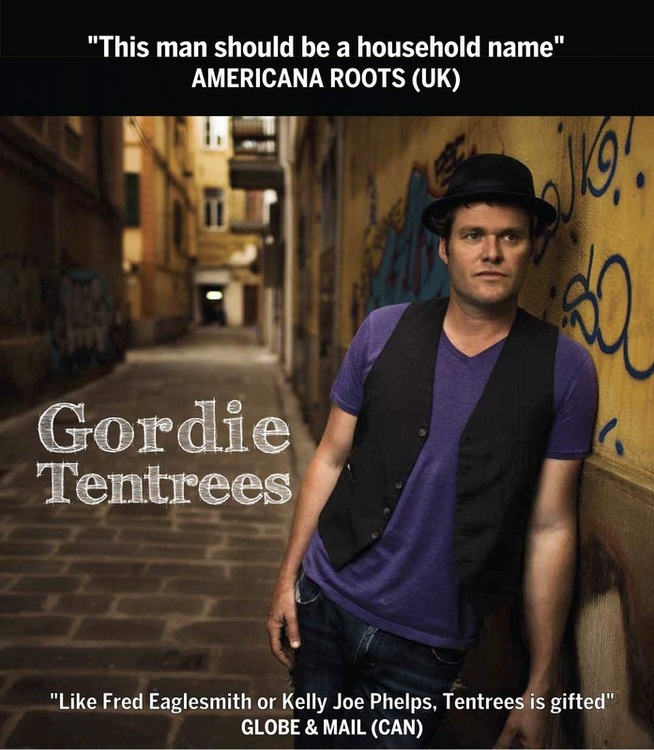 
“Tentrees delivery is so relaxed and unpretentious its impossible to not get drawn into his world. Sounding like a younger John Prine”  No Depression (US)

Born in Hamilton, Ontario, and raised on his family farm in Bancroft, Ontario, Gordie Tentrees has spent the past 15 years working on his craft while hiding out in Whitehorse,Yukon.

At age 25, Tentrees wrote his first song and learned his first guitar chord, eventually graduating to dobro and harmonica, touring and recording. His first three albums are narratives that chronicle his difficult past – the gritty characters in his life and his relationship with the dark. His music is his own blend of folk, roots and blues sounds, and Tentrees counts Rick Fines and Fred Eaglesmith as heroes and strong influences in his songwriting.

Tentrees earned a Western Canadian Music Award Album of the Year nomination for Mercy or Sin, performed at the Best of Canada Vancouver Olympics concert, and was a finalist in the International Song Competition out of 15,000 entries in the Americana category. Competition judges included Tom Waits, Loretta Lynn and Jerry Lee Lewis. The rave reviews starting pouring in and Tentrees’ reputation as one of Canada’s hardest touring musicians began.

"This is the fifth album by a man who really should be a household name, thanks to the excellence of his vocal and writing skills and his ability to create atmospheres and arrangements perfectly suited to his writing, something not all great singer songwriters are able to master.”
- AMERICANA ROOTS UK 5/5
More info on Gordie right here www.tentrees.ca